Sports media analyst Hank Goldberg passed away on the 4th of July at his home in Henderson, NV; the day of his 82nd birthday.

Known as Hammerin’ Hank, Henry Edward Goldberg was an American sports radio and television personality based in Miami, Florida. For 40 years he served as the radio commentator for the Miami Dolphins from 1978 to 1992.

In 1993, Hank Goldberg became a national figure as an NFL reporter and handicapper at ESPN for two decades. Goldberg made appearances on the popular NFL Countdown and ESPN Radio, and also contributed to the network’s thoroughbred racing coverage.

“Hank was a bigger part of ESPN’s soul than anyone will ever know. His information made us smarter. His insight made us wiser (and) his friendship made us better people. Rest in peace Hammer, and thank you from all of us.”

During the 1970s, legendary TV and radio host Larry King recommended Hammerin’ Hank for a sports media and radio gig. And that’s how Hank got his start in radio. Goldberg supplemented his income as a ‘ghost handicapper’ for Jimmy ‘the Greek’ Snyder on CBS‘ groundbreaking studio show The NFL Today.

Goldberg and Jimmy The Greek were inseparable, and Goldberg was the real insider for information provided for the NFL picks. Hammerin’ Hank’s rise as a handicapper and sports betting analyst took off years later at ESPN. 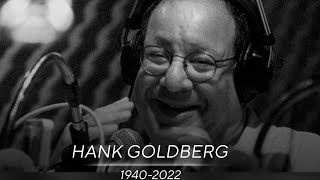 Goldberg’s contact list in sports and media was massive. He developed sources with every NFL team throughout his broadcasting and reporting career. He became a close contact of many players and athletes and was a trusted source in the industry to many, including Raiders owner, Al Davis.

Hank was most comfortable behind the microphone. And his natural storytelling ability added to his popular coverage of sports and horse racing events. So did his brash, bombastic, and baritone voice. Goldberg’s provocative style helped shape two generations of South Florida sports fans while hosting a three-hour radio show “Goldberg at Night” for WIOD.

Handicapping and betting the horses was a passion of Goldberg’s as well. He covered major horse racing events from the Triple Crown to the Breeders’ Cup for ABC and ESPN for more than 20 years.

What Hank Goldberg meant to the industry

Goldberg had lived in Henderson since 2018, when he moved to live near and be cared for by his younger sister, Liz, during his treatment for kidney disease. Hank had many Nevada sports betting contacts.

That included a 20-year friendship with Las Vegas sports betting information pioneer, Jim Feist. Feist told PlayUSA that the two worked together and did a twice-a-week NFL podcast during the 2019 season before Hank’s health started to decline more rapidly.

“He was so informed, and we would talk for an hour about a ton of insider news most did not know about. We shared many dinners together over the years, and he was the greatest dinner guest. Hank had so many stories, and was over the top with who he knew and all the times he spent with the biggest names in the sports and horse racing world.”

“I can assure you, he was no phony. The Hammer always put his money where his mouth was, and that immediately earned him a high level of respect with me. As a longtime Las Vegas bookmaker, there were few opinions I valued more than Hank’s on the NFL.”

“Most people of this generation, whether they want to realize it or not, were inspired by him. His picks were some of the first ones on mainstream platforms. You had Jimmy ‘The Greek,’ Pete Axthelm, and Hank Goldberg.

Without them breaking through, I don’t know if there is gambling talk on College GameDay, plus ‘Bear’s Board,’ and (sports betting show) Daily Wager. Everyone, these days, is capitalizing on his success and expanding it to the next level.”

Hank Goldberg died after succumbing to a seven-year battle with kidney disease. However, everyone will remember Hammerin’ Hank as one of the best in sports media, not only for his coverage of events but also for his love and passion for race and sports betting.

He brought betting and prognostication to the masses decades before the US legalized sports betting.